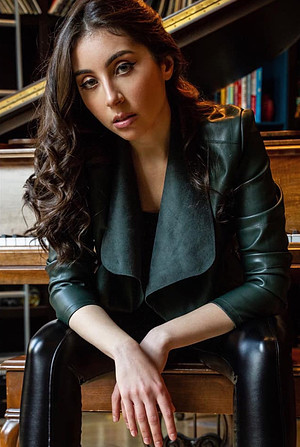 Maryam Raya enjoys an acclaimed performance career at the piano, which has taken her throughout the United States and to international stages in countries including England, Spain, France, Italy, China, Estonia, Latvia, Finland, Colombia, and Dubai, among others. She is recognized for her dynamic stage presence, and larger creative versatility through multiple art forms. Raised in Washington D.C. she gave her first recital at the age of nine.

A prizewinner of numerous competitions and awards, she has been invited to perform in venues which include Stern Auditorium, Carnegie Hall, Weill Recital Hall, Carnegie Hall, The National Gallery of Art, The Phillips Collection, the Kennedy Center, Lincoln Center for the Performing Arts, Tenri Cultural Institute, Greenwich House Music School, The National Opera Center, The Kosciuszko Foundation, the Smithsonian Institution, the Embassy of Poland, and the Embassy of France. Her 2019 Fall season alone features lecture recitals at Columbia University and abroad in Paris, a solo recital debut in Sicily, and a return to Stern Auditorium, Carnegie Hall on the 250th anniversary of Beethoven’s birth to perform his Third Concerto under the baton of Maestro Gerard Schwarz.

Maryam's passion for the interconnectedness of all art forms has led her to perform in spaces outside of the traditional recital hall. She has given lecture recitals at academic institutions including Columbia University, frequently plays in art galleries and museums, and has been invited to perform in various fashion and film festivals, most recently, Couture Fashion Week in New York and Cannes. She especially commands the repertoire of the 20th and 21st centuries, through which she specializes in integrating performances of newer works with visual arts and poetry as a means of communicating and connecting with audiences of diverse backgrounds. In addition to her studies at the piano, Maryam holds a Bachelor’s degree in English Literature, which she received with honors.

Enthusiastic about the importance of classical music in the lives of younger generations, Maryam has developed partnerships with middle and high schools through all five New York City boroughs. She mentors keyboard courses, and performs full recitals for students regularly.

A graduate of both the Eastman School of Music under the tutelage of Natalya Antonova, and the dual degree program at the University of Rochester, Maryam holds both Bachelor and Mas- ter’s degrees in Piano Performance as well as a Bachelor of Arts in English Literature, both of which she completed in four years, culminating in a thesis on the metaphysical poetry of John Donne and Andrew Marvell. Maryam completed pre-college piano studies in Washington D.C. with Mikhail Volchok beginning from the age of twelve at the University of Maryland. In addition to her accomplishments as a pianist and a writer, she is a published fashion model.

Maryam has been featured on CBS and FOX News. Her upcoming engagements include solo recitals in France and Italy.